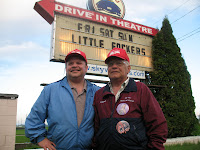 KFAI Last Reel: Drive-In Movie Theaters of Minnesota I produced this story on drive-in movie theaters for KFAI's MinneCulture series. The story includes visits to the Sky-Vu in Warren, Minnesota and the Starlite 5 in Litchfield, Minnesota. The Sky-Vu features a sandwich called "The Bomb," which contains cheez whiz and barbecue layered on top of a hot dog. This story includes lots of archival drive-in promos, the sounds of popcorn popping, film projectors and such. Mostly it focuses on people and why they love drive-ins and what will be lost when the last one closes.  There are two sections I really had fun editing. At 14:00, there's a one-minute scene involving Bob Cowgill's memory of watching "The French Connection" during a thunderstorm. At about 24:41, there's another one-minute scene involving the 1973 flick "The Cheerleaders," which the Sky-Vu played in the late 1970s as an attempt to win back viewers to the drive-in. It was also gr
Read more
More posts