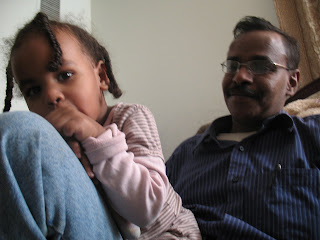 THE WORLD Young Somalis disappear The violent civil war in Somalia is now in its seventeenth year. Thousands have died. Millions have lost their homes. Now the war appears to be affecting people living in the United States. In Minneapolis, several Somali men — and at least one high school student — are believed to have returned to their East African homeland. Their families are worried that they might be fighting as insurgents in the war against Ethiopia, whose troops have occupied the country since 2006. The audio is  here . (Photo: Abdirizak Bihi and daughter. Bihi's nephew — Burhan Hassan — is one of many Somali-Americans from Minneapolis who are now thought to be living in Somalia. Hassan was a student taking advanced placement classes at Roosevelt High School in Minneapolis before he disappeared. Photo by Todd Melby)
Read more
- December 30, 2008
REUTERS Minnesota edges closer to deciding Senate winner The end drew closer on Tuesday in Minnesota's drawn-out U.S. Senate race, with Democrat Al Franken holding a slim 50-vote lead over incumbent Republican Sen. Norm Coleman, officials said. Franken was leading Coleman 1,211,951 to 1,211,901 -- with at least 1,346 absentee ballots still to be counted by early next week. "We're darn close," said Minnesota Secretary of State Mark Ritchie, a Democrat and member of the five-member board trying to determine the winner of the November 4 contest. More here .
Read more
More posts