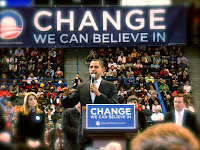 THE WORLD Super Tuesday Preview Super Tuesday 2008 was supposed to be the day that would decide who the Democrats would choose as their presidential nominee: Barack Obama or Hillary Clinton. This story examines how the economy influenced voter choices in Minnesota. The audio is here . (Photo courtesy of Wikipedia Commons.)
Read more
More posts